Every time we revisit a venue we love we always look at new ways to look at it. For a wedding videographer Northbrook Park is a wonderful place to gain inspiration. This time we wanted to try a different story. This time we focused on the Christian faith belonging to Erica and Robert.

We have visited Northbrook Park several times over the years and each one is special. There is something about the place which draws a really chilled and lovely bride and groom. Just the kind of couples we love to film!

Speaking of film, we have to tell you their proposal story!

Back in September 2016, Erica arrived at the Cinema in East Dulwich to watch one of her favourite films, 500 days of Summer. She was getting into the film when it suddenly stopped. Suddenly her face popped up on the screen and she could hear Robert’s voice narrating a poem. Robert then popped up in the cinema and brought Erica to the front, the room was filled with friends and family in disguise as well. He took her up onto the stage and proposed. Of course, she said yes.

Onto the wedding day itself. We had the lovely Asun Roland Photography keeping us company for the day – a real pleasure. The real highlight is when we had a first look before the ceremony. Erica and Robert met (with eyes closed) and prayed with each other while we captured it. For us as the wedding videographer, Northbrook Park allowed the space to create this in a natural way. The bonus being, Robert was mic’ed up during the exchange. This was definitely something different.

After the ceremony and speeches, Robert and Erica were changed into their African outfits. They partied until the end. For the two of them, having a wedding videographer Northbrook Park allowed us to return and create a different take on the day. 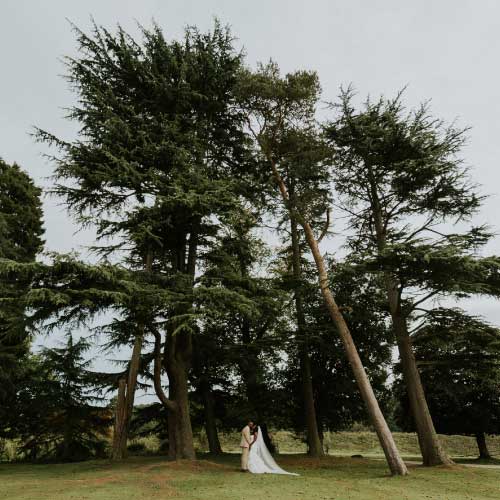 “We definitely chose the best videographers”

“Your humour, calmness, creative eye for detail and focus really helped to keep both me and Erica calm on the day, not to mention how patient you were… oh and how can i forget those dance moves 😜”